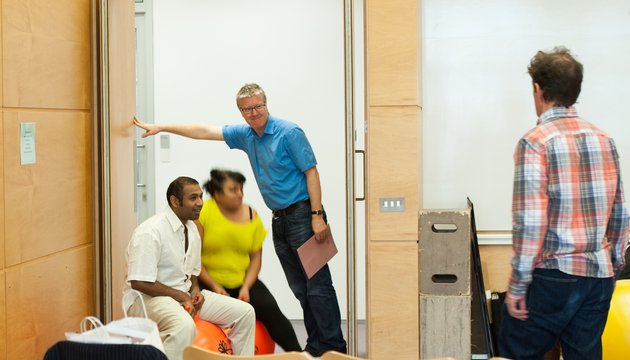 For two years now it has just been myself and Patrick Morris working on the scripts with occasional meetings for advice with Ali Campbell (QM Drama) or Gabby Quijano and Peter Frankental (Amnesty). Today it feels like the real thing begins as I get to meet the actors Shane Shambhu, Rina Fatania and Neil Bromley and work through the script with them. I also meet Ashley (Ash) Day our production manager who is busy making a cardboard well. I do an overview of the project and the issues in the plays and we get down to reading. It becomes quickly apparent that I need to cut lines that are too wordy or are surplus to time constraints. After the read through Patrick and myself discuss who should play George the BEW Chief Executive. Neil's Scottish accent wins us over and he will play George "The shark" Billings. We all discuss the issue of Basanti's accent. As I have written it she speaks a different language to Trevor but obviously to do the plays to an english speaking audience she needs to speak english. I had assumed she would do an Indian accent but Patrick thinks it will work better if she speaks with a cockney accent! I am really unconvinced and the actors seem doubtful but once we do it it works (I still don't know why). I have to go to teach so leave them being measured for costumes. Note to self actors and theatre folk seem not to eat lunch so need to bring sandwiches in future as they just keep going right through lunch (rare picture below of actor eating lunch). Later that night Patrick and myself discuss rewriting. I am up late getting scripts done for next day or organising aspects of the coming tour. 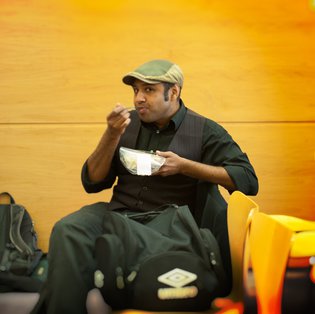 Patrick and the actors work on the new scripts while I have a meeting with Jo McCallum and Kevin Warne our Law School Public Engagement staff about the planning and logistical arrangements for the coming tour. I am begining to understant what a producer does. Anyhow all seems under control and so I head off to do press and media promotion for the tour. Later I meet Patrick to discuss new rewrites. Late night again with rewriting and teaching preperation for tomorrow. I'm exhausted and it's only day two... 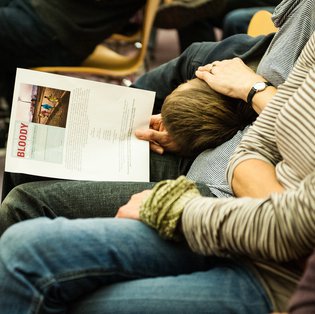 Emailed new scripts to Patrick and went to teach. Actors rehearsing all morning and our film crew Reeta and Adam are coming at 2pm to film rehearsals and do interviews about the project. My plan is to document as much of the process as possible both for legacy purposes but also so others can see how we did it and do similar public engagement projects. Some may also use our scripts and experience to actually restage our production or parts of it. I have not met Reeta and Adam before and they seem lovely (picture below with Ash on the far right). The actors are in costume for filming and run through parts of the plays. It goes really well and I think we have the writing sorted now. I brief each of them on their back stories and some of the technical legal issues that will come up during audience interventions. Neil has the most difficult hotseating with the audience as he has to explain/defend limited liability and the use of corporate groups to limit liability even further. He seems to get it fairly quickly so hopefully it will stick under pressure. Reeta and Adam film interviews with myself and Patrick and then I head off round campus with film crew to do dynamic walking to liven up the documentary. I repeatedly fail to walk with enough gravitas for Adam to be happy. Finally I manage to pull it off or he lowers his standards - not sure which. More meetings about logistics of tour. 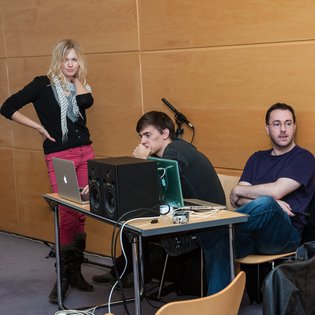 A whole day of rehearsals. I ask Ash if he can put a sort of Dastardly and Muttley cartoon phone call voice in the phone call scene in the Trial. He obliges as if he had one handy all along. Ali Campbell spends time with us on how to forum the plays. The actors look very worried (picture below of a worried actor). I have to leave early afternoon to do media. Ali and Patrick work through ideas with the actors. Ali's students are going to come and be our dress rehearsal audience next week. Ali looks worried. Actually everyone looks worried. I thought it was going well. 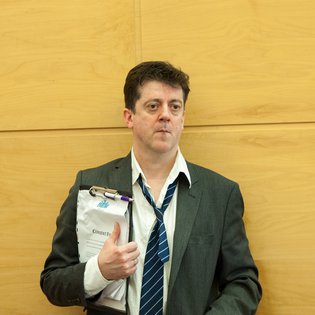 Monday 14th and Tuesday 15th Rehearsals continue without me as I am busy with students and logistics for tour. I speak to Patrick on the phone both days he seems worried but focused on getting things right.

Ali Campbell's MA students are going to be our test audience today. Ali runs through warmup with them and they seem very excited. Time is tight as the actors have to get off in a few hours to get to Belfast ready for tomorrow's show. It goes well. The most noticable reaction is the power of the 'legal' words which are unfamiliar to the drama students. By the end they are physically tense and pushed back in their seats. The major discussion at the end is about how powerful words are. The students are going to go off with Ali and work up ideas for how best to get the audience to engage with the interactive forum part of the plays. They are all going to try to come to the live Amnesty show next Wednesday. They email later after their brainstorming session with ideas for using a strobascope (the actors do a freeze frame of key scenes to remind the audience and identify where the audience might like to intervene) and emphasising getting the audience to suggest actions for change rather than just discussing change. At this point I'm pretty happy with the plays but I'm worried about whether we will get the audience to get in the plays to fix them. The actors, Patrick and Ash leave to head for Belfast. I head off to do logistics stuff for Belfast (need lots of paper for the audience) and preparation for classes tomorrow. I will fly into Belfast just before the show after classes are finished. Nearly there...it all begins in Belfast tomorrow. 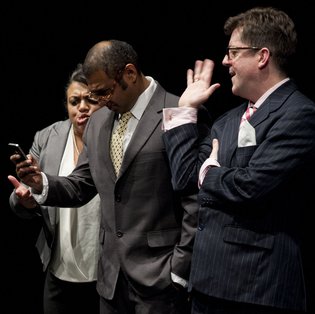